The weather in Brazil is showing some improvements in both southern and northern Brazil. In southern Brazil there have been some irregular rains in the states of Parana and Rio Grande do Sul, but the heavier amounts have been closer to the Atlantic coast while the soybeans are grown mostly in the western regions of the states. The forecast continues to call for more chances of rainfall, but once again mostly eastern areas.

Central Brazil had a somewhat dryer week last week and the forecast for this week is also on the dryer side. The dryer weather is very welcomed after several months of torrential rains.

The 2021/22 soybeans in Brazil were 1.2% harvested as of late last week compared to 0.4% last year and 1.1% average according to AgRural. The early harvest is slower than anticipated due mainly to wet weather in Mato Grosso.

Mato Grosso - The soybean harvest in Mato Grosso was 4.1% complete as of late last week compared to 0.8% last year and 5.1% average. This represents an advance of 2.8% for the week. It has been wet in Mato Grosso for several months, but the forecast looks dryer going forward, so the harvest pace in the state should accelerate.

There are reports of moldy seeds in northern Mato Grosso due to the wet conditions, but it does not appear to be a generalized problem. Early yields are generally good with a peak yield of 72 sacks per hectare (64 bu/ac).

Farmers in the municipality of Campo Novo do Parecis in western Mato Grosso have started to harvest their early maturing soybeans and they are reporting good yields. The first fields harvested were planted in mid-September and were under irrigation and good fertility. Yields are being reported as high as 70 sacks per hectare (62 bu/ac).

According to the president of the Rural Union of Campo Novo do Parecis/MT, later yields in the municipality are not expected to be quite as high, but still higher than last year's average yield of 58 to 60 sacks per hectare (51.8 to 53.6 bu/ac). As soon as the soybeans are harvested, farmers are planting a second crop of cotton, corn, or popcorn.

In the municipality of Sorriso in central Mato Grosso, approximately 20% of the soybeans have been harvested with yields in the range of 57-58 sacks per hectare (50.9 to 51.8 bu/ac). Early yields were down 3% to 30% due to seeds rotted in the pods and broken off plants. Later yields are expected to be higher and average yield in the municipality is expected to be in the range of 60 sacks per hectare (53.6 bu/ac).

In the municipality of Diamantino in west-central Mato Grosso, farmers are reporting soybean seeds that are lighter than normal and of somewhat inferior quality. Yields in the municipality are expected to be in the range of 55 sacks per hectare (49 bu/ac), which is Ok but less than what farmers had expected. They blame the lack of sunshine during November and December for the lower-than-expected yields.

The graph below from the Mato Grosso Institute of Agricultural Economics (Imea) illustrates the current harvest progress (red line). 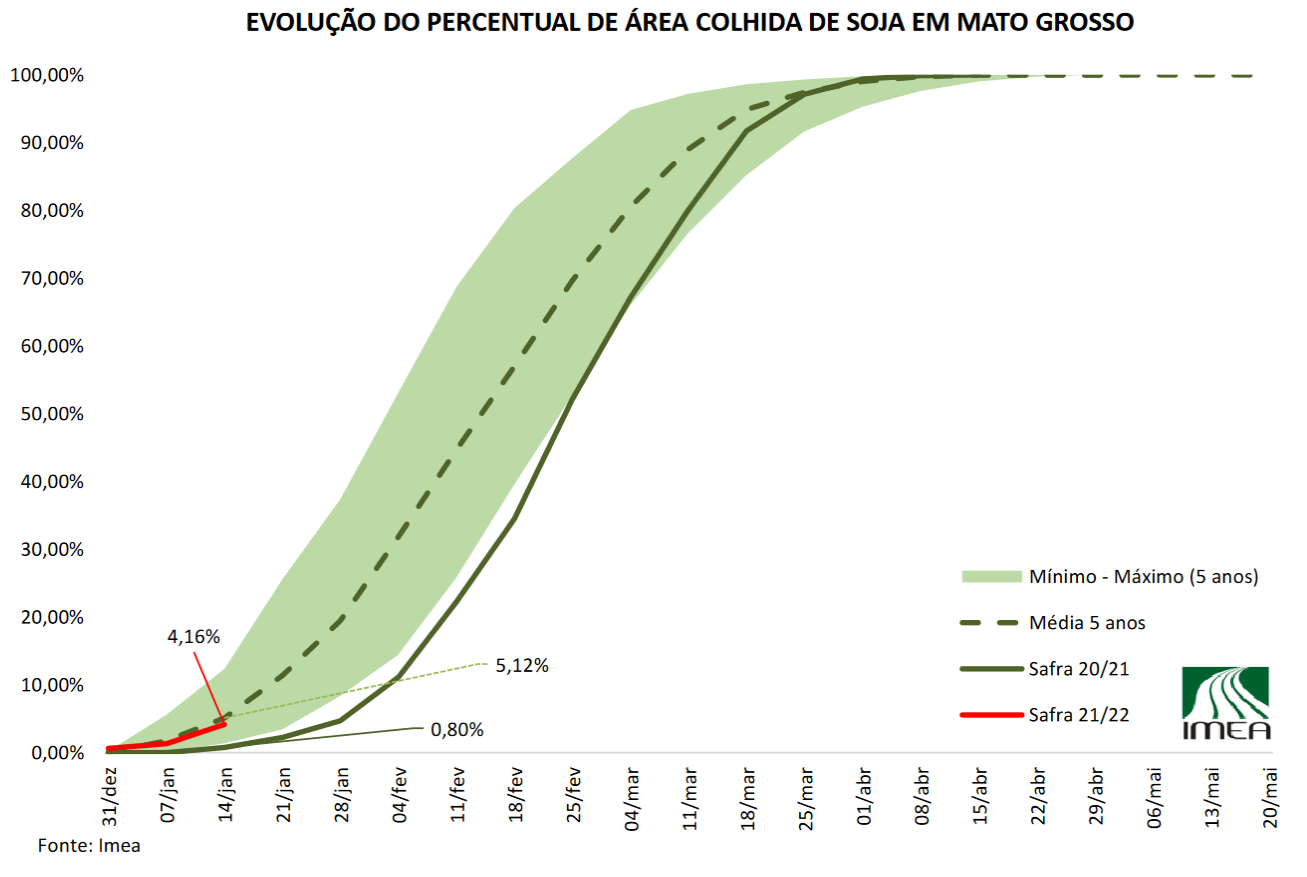 Scientists are warning farmers in Mato Grosso to be alert to the presence of white mold and white flies in their soybean fields. The constant wet weather has kept farmers out of the field and scientists are worried that diseases and pests may get a foothold in the state's soybean fields.

White mold enters soybean fields when the rows start to close within about 45-50 days after planting. Fungicide treatments should start at that time by land applications because the treatment needs to get to the lower levels of the plants where the mold proliferates, especially during periods of prolonged wet weather such as happened this growing season. Areal applications are not effective in controlling the disease so farmers should take advantage of whatever open window they may have to make land applications.

White flies have also been reported in soybean fields in Mato Grosso. The insects can cause direct damage to soybeans by sucking out plant juices and indirect damage by transmitting viruses to the soybeans. The insect could be particularly damaging to later maturing soybeans.

The soybeans in Parana were rated 34% poor, 37% average, and 29% good earlier last week. The crop was 8% in vegetative development, 25% flowering, 54% filling pods, 13% mature, and 2% harvested. Harvest activity is concentrated in western Parana where the drought has been the worst and early yields are very low in the range of about 5-25 bu/ac.

Rio Grande do Sul - The recent weather in Rio Grande do Sul has been very hot with temperatures over 100&#176F. The state did receive some irregular rains last week and over the weekend and there is more rain in the forecast. Heavier amounts are forecasted for the eastern part of the state with lighter amounts forecasted for the western part of the state.</p> <p>Farmers took advantage of the recent rain to plant some of their soybeans which are now 95% planted. The soybeans in the state are 69% in vegetative development, 28% flowering, 3% filling pods, and 0% harvested.</p> <p>In the municipality of Santo Angelo in northwestern Rio Grande do Sul, early planted soybeans, which accounts for approximately 30% of the total, have suffered significant losses because the hot and dry conditions hit as the soybeans were filling pods. The adverse conditions also impacted the germination and stand establishment of the later planted soybeans. It is estimated that the soybean yields in the municipality will be down 50% even if rain returns to the region.</p> <p><b>Mato Grosso do Sul</b> - Approximately 60% of the soybeans in the state are grown in the southern half of the state where the ongoing drought continues to impact the soybeans. There were some showers in southern Mato Grosso do Sul over the weekend, but they were generally less than an inch. The forecast is calling for light and scattered showers with generally poor coverage.</p> <p></p> </div> <div class="container-fluid" id="footer"> <h6>Copyright Soybean and Corn Advisor, Inc. 2009-2022</h6> </div> </body> </html>